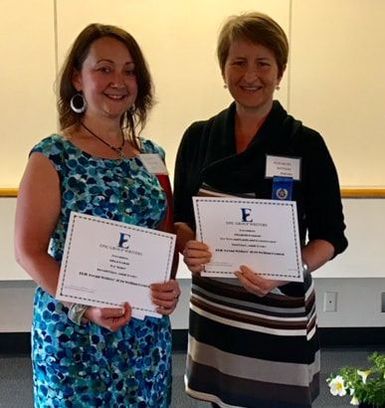 Congratulations to Winners Alison Ersfeld and Elizabeth Kennedy
First Place
​Boys and Bands and Broken Hearts by Elizabeth Kennedy
They were days, mostly nights, of cider and whisky, and long walks home in the cold.

Long train rides through low green fields thick with sheep,
of army check points and distant bombs.
Soldiers tromping through garden patches on the front lawn during Christmas teas,
rattling the china with their boot falls.

Cold and damp and stone and brick, moss and turf and coal.

White toast, margarine and tinned beans, heavy chips and greasy curry,
and veggie burgers thick with mayonnaise, at 2am on icy streets after the pubs closed.
Sweet dark tea with milk, imbibed at least once an hour.

Damp and smoke and piss and vomit on the city streets after a hard weekend,
and chilly earth with knotted black trees in iron-gated parks.

Sunrise over the River Liffey shrouded in the smoky leather jacket
of the tall pretty Liverpool boy with the beautiful hands,
who would later be the first kiss – one cold July midnight,
under the open moon in the heart of the oldest part of town.
Statues of the Virgin Mary and all the saints looking down on us,
from churches and cathedrals above.

Kind gentle friends with soft words and open hearts.
That was Northern Ireland and Dublin as I remember them.

Boys and bands and broken hearts, cold and damp and rain.
Warm bright colors under the dancing light of center stage,
life heavy with anticipation.
Second Place
Seder by Alison Ersfeld
Twelve bodies, one table
three bottles of Manischewitz
a lonely cup for Elijah outside the door
inviting spirit's entrance.

Plagues
symbolized and materialized in ten miserable red drops
invoked by the elder
summoning to this assembly all manner of wretchedness.

The great pyramids of Egypt were erected
through the sweat and abuse of my bloodline.
My ancestor's ancestors took lovers between their solid thighs,
birthed a new generation of slaves
washed the laundry of the elite pharaohs,
toiled on the banks of an abundant river
made bricks under an oppressive sun.
Stayed alive, hoped, believed, planted,
prayed and danced.

Each subsequent generation
nurtures the seed of emancipation,
plants that beacon on tomorrow's horizon,
nourishes endurance with whispers of
Exodus.

Is it an elixir for survival, or
should desert dust stories remain outside to dissolve in Elijah's cup?

The Angel of Death will soon pass over
claim what is his, feed his black fog.
Knowing the bodies and bones will disappear
the story-giver chooses her words
pours the Manischewitz
dips the bitter herbs
and hands her children Elijah's cup to place outside the door.
​Adult Author Prose 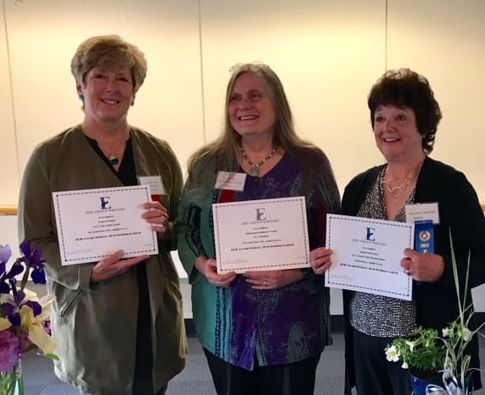 We arrived at my childhood church. Blue-shaded stained-glass swept skyward in abstraction—a nostalgic vision.
At the expected lot, a sign read, “Preschool Parking,” so I drove on by. The next driveway was marked, “Exit Only.” It was clearly the last. I pulled in.
“I don’t think you can enter here,” Mom said.
“Well, I just did. Nobody’s looking. I’ll turn around and park.”
“Okay sweetheart.” She wrinkled her eyebrows.
I set the brake and strode around to the passenger door. Using her cane and my proffered arm, she bee-lined for the sanctuary, shoes scuffing. Entering, we heard the pastor’s welcome. We hadn’t missed much.
Mom indicated the white flower arrangement we had sent. The gladiolas seemed to reach for heaven.  “Beautiful,” I whispered.
Speakers described Mom’s friend, her loving nature and how she’d enjoyed a party. Mom nodded agreement. She stroked her friend’s photo on the bulletin.
Our next-door neighbor’s daughter from years ago, spoke last. I couldn’t reconcile this woman with the tow-headed child of 45 years ago. Gray streaked her hair.
Pain speared Mom, and I held her until it passed. She folded low at the waist but made no sound.
“Don’t get up until everyone leaves,” she said. She seemed afraid.
A man walked up and kissed Mom’s cheek. A woman took her hands.
I whisked the guestbook off its easel so Mom could sign it while she sat. I returned to find her with the purchasers of our old home. When they left, she asked, “Who were those people?”
Mom greeted friends, but then froze as cramps wracked her. For her sake, I hoped they’d be mistaken for grief.
“Ready to go home? You saw most of your friends,” I said.
“Just drive to the hotel,” Mom said. “When her husband died, the family held a reception down on the grass. It’s not far. We’ll see them from the car.”
We didn’t. I wound through multiple parking lots. Nobody looked familiar.
“It’s the official parking lot tour.” My jovial tone failed to mitigate our frustration. Finally, I left Mom sweating in the hot car while I visited reception for directions. Ten long minutes later, I returned. Mom’s eyes stared wide.
She grabbed my arm and took a deep breath. “Don’t leave me again.” We found the celebration of her friend’s life south of the hotel’s swimming pool, and I nabbed available seats. Mom immediately introduced us to the couple at the table—strangers—using her familiar charm.
Servers distributed hors d’oeuvres: marinated rack of lamb and bacon-wrapped scallops. Wine glass in hand, Mom nibbled as old friends visited. I’d seen her familiar gestures at numerous parties. Years dropped away from her.
She chatted longest with two of the original foursome of young mothers from our block. Their husbands and adult children offered hugs plus occasional kisses and Mom sparkled. This woman—social, vital—still loved the center of the action. Totally engaged, her pain had vanished.
Eventually, guests drifted away. Someone collected the sea-blue gauze table-toppers. Mom lifted her glass absently, not breaking her attention to a conversation. Centerpieces were collected next, but she didn’t notice.
Finally, laughing, I gestured at the empty tables. “Mom, you closed down the party.”
A departing friend said, “I’ll come out soon and visit.”
Mom bobbed her head, smiling, and rose to leave. I told the friend, sotto voce, “It won’t be long now.”
The following day was rough for Mom, but between spasms, she reminisced about how great a send-off we’d given her friend. “She’d have loved that party,” Mom said.
Mom’s days flowed like a river thundering toward the precipice of a waterfall. Being swept over the edge was inevitable. Yet, for one day, Mom had caught hold of a rock and pulled herself briefly from the rushing current. Before her grip gave way, she felt the sun and life was rich.
Her best friend’s memorial service became Mom’s touchstone. Tightly, she held the memory of the day when men had kissed her cheek, and she had closed down the party.
Strangely comforted, so did I.
​Teen Author Poetry
First Place
The Duality of Light by Emma Howlett
Am I a particle?
Or am I a wave?

Do i fight for myself?
Or want to be saved?

In no way am I
A definite article

I can't be defined
By a small little particle

I am just like the light, and
I can't be confined.

I am flowing, an explosion
I am raging as the ocean

I am solid, I am shrewd
I am devoid of emotion.

Will I grow up to be a scientist?
Or is it artistry I crave?

You see, I'm like nothing
The world's ever seen

Except maybe in Space
Or someplace in between

Surging as two things,
Both one in the same

Pulsing and powerful,
Yet I still don't know my name.

After a billion year journey,
I finally reached the Earth

And I was asked a question,
Which I answered with great mirth:

I smiled and held out a shimmering hand,
The duality of light, they could not understand.

I am two things in one,
Both particle and wave

I am art, I am science
I am meek, I am brave.
Second Place
C'est La Vie by Riley Beck
I am a wooden sign
That’s sat for too long
In the shade of an (old) pine tree.
Overcome with (dried) moss
And filled with (hungry) termites.
The words that defined me,
That made me,
Have faded.
Honorable Mention
Trampled Garden by Madeline Taylor
i knew a girl that planted flowers in her yard
and smiled at me on my way home from school
she was rose blushed bright in the shine of the sun
as i bounced by with pigtails and sneakers

her flowers were her pride, her joy, her passion
spilling over with blooming beauty, petals swaying in breezes
her smile is what made me stop and wave
her smile that blanketed meadows and banished sadness

i lived two doors down in a fading blue house
far enough not to see the lights of her bedroom
but close enough to feel, to hear, to see
purple-yellow bruises and screaming down halls

her jeans were never clean because she hated going inside
preferred the serenity of the rectangular yard
open to where her neighbors could see, but not witness
the slamming of fists against paper thin skin

i can’t pinpoint the exact day, the moment
when smiles fell and distant glances replaced
the lopsided, goofy grins of our past
but i remember the sinking, gut-twisting feeling
of seeing her disappear almost altogether

police cars lined down our block
men stepping into her yard and trampling over
years of hard work into the dry, dusty dirt
i wanted to scream at them to watch their step
but crunching over dead flowers and leaves
is hardly noticeable to the passerby

i knew a girl that planted flowers in her yard
and smiled at me on my way home from school
she lay mangled, broken down in her own home
i can’t stop them from stepping on her garden